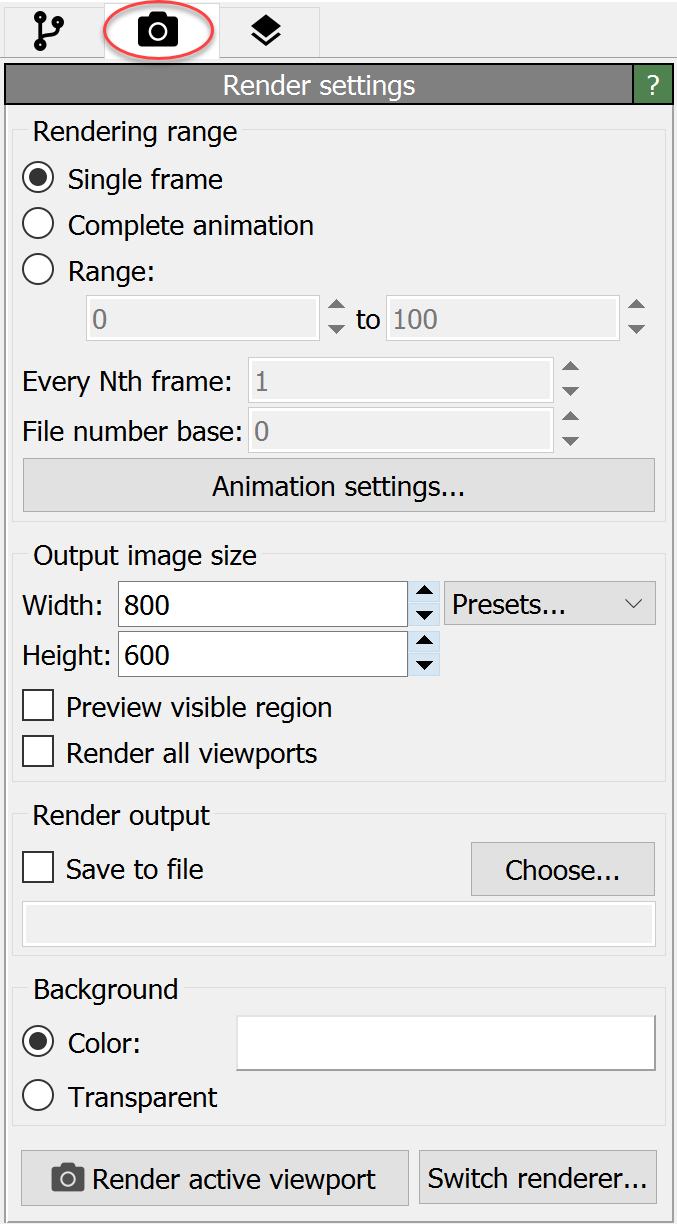 This panel contains general settings related to image and movie rendering, e.g. resolution, output filename, background color, etc. It is found on the Rendering tab of the command panel as depicted in the screenshot.

To start an image/movie rendering process, use the Render active viewport button located at the bottom of the panel or the button in the toolbar located above the viewports. OVITO will always render the currently active viewport, which is indicated by a yellow border. Right-click in a viewport to make it the active one.

Selects which animation frame(s) to render. If you decide to render an animation, i.e. a range of frames, make sure you also check the Save to file option and set an output filename below. Otherwise, the rendered animation will not get permanently saved to disk.

This value determines which fraction of animation frames is actually rendered. Setting this parameter to 1 renders every animation frame. A value of 2 will render only every other frame, etc. Thus, you can use this to reduce the number of generated video frames in case of extremely long simulation sequences.

When saving the frames of the animation as a series of image files (rather than a single movie file), OVITO automatically appends the frame number to the output filename. This setting lets you specify another base file number, i.e. an offset. This can be useful if you want to collect the video frames from several animation sequences in one directory and later combine them into one contiguous movie using an external video encoding software.

Sets the width and height of the rendered image or movie in pixels. Note that you can activate the preview mode for an interactive viewport window to see exactly which rectangular area of the viewport will be visible in the final output image.

This option activates preview mode for the current viewport window, which means it will display a rectangular frame indicating the area that will be visible in the rendered output image. The aspect ratio of the rectangular guide is determined by the output image width and height.

This option tells OVITO to save the rendered image or movie to disk in addition to displaying it in the frame buffer window. Use the Choose… button to pick an output filename. When rendering an animation sequence, all animation frames will be written to a single movie file if you pick a video format such as AVI or MPEG. If you choose an image format (e.g. PNG, JPEG), OVITO will instead produce a sequence of image files, one per frame. In this case, the frame number will automatically be appended to the base filename you picked.

You can choose between a uniform background color and a transparent background. In the latter case, OVITO will make those areas of the output image transparent that are not covered by any objects. This is useful if you intend to put the image in front of some other background later, for instance on a presentation slide. Note that transparency information (alpha channel) must be supported by the output format for this to work. Best choice is the PNG file format.

Use this button to select a different rendering engine. OVITO Pro offers several rendering engines, which differ in terms of visual quality and rendering speed. See the Rendering page for a list of options. Each rendering engine has specific parameters and settings, which are displayed in the separate panel below the Render settings panel.