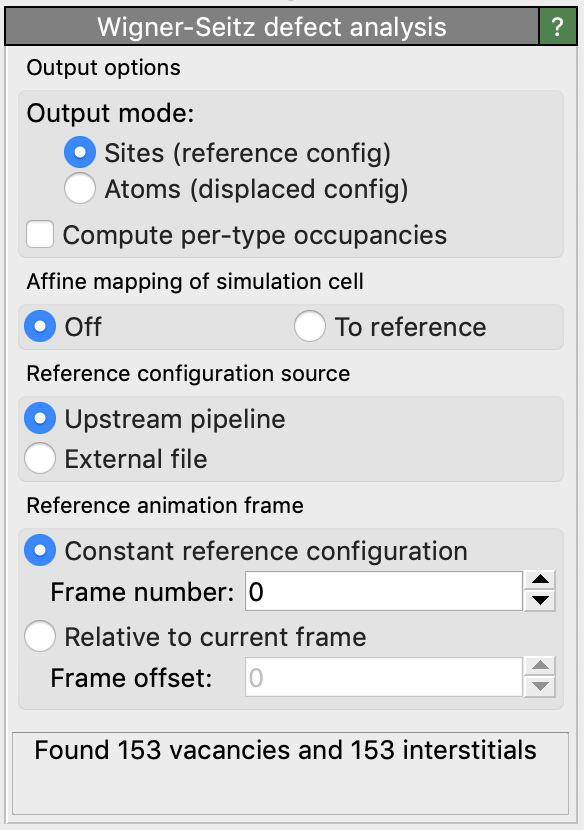 This analysis modifier identifies point defects in crystalline structures using the so-called Wigner-Seitz cell method. It can be used to count vacancies and interstitials, for example, or track their motion through the lattice.

The WS cell method determines which atoms occupy what sites. In the end, every atom will be assigned to exactly one site. Some sites may be occupied by no atom at all. We call these sites vacancy sites. Other sites may be occupied by more than one atom. We call such sites interstitial sites and the atoms occupying them interstitial atoms. The assignment of atoms to a site is performed using a spatial partitioning scheme as depicted in these figures.

Each atomic site of the reference configuration defines the center of a Wigner-Seitz cell (also called a Voronoi cell), which is the spatial region belonging to that site. Any atom that is located within the Wigner-Seitz cell of a site is said to occupy that site.

How is the Wigner-Seitz (i.e. Voronoi cell) of a site defined? Mathematically speaking, it is the locus of points in space that are closer to the site than to any of the other sites. Note that points exactly on the border line between two Wigner-Seitz cells have exactly the same distance to the two sites at their centers.

It is worth pointing out that thanks to this property, the algorithm never has to construct the geometric shapes of the WS cells explicitly. To determine in which cell a given atom is located, it is sufficient to determine what is the closest site. The algorithm thus boils down to a closest point search. Taking an atom’s location, the algorithm finds out what site is closest to this location and increments that site’s counter, the so-called occupancy number, by one.

The current simulation frame in OVITO is taken as the displaced configuration by the modifier. The reference configuration is by default taken from frame 0 of the loaded animation sequence (option Upstream pipeline). Alternatively, the modifier lets you load the reference site positions from a separate data file (option External file).

The modifier lets you choose between two different output modes: Sites and Atoms.

In output mode Sites, the modifier outputs the sites of the reference configuration together with their computed per-site occupancy numbers (as shown in the 4th image above). Each site will be associated with a particle property named Occupancy, telling the number of atoms sitting on that site. This integer property subsequently allows you to identify vacancy and interstitial sites as well as antisites (e.g. using the Expression selection modifier). It is important to realize that in this output mode, the displaced configuration gets completely replaced with the reference configuration after performing the WS algorithm. What you see in the viewports are now the ideal site positions and the physical atom positions are no longer available!

In output mode Atoms, in contrast, the modifier will output the atoms of the displaced configuration. Each atom will be assigned a property named Occupancy, now counting how many atoms in total are occupying the same site as the atom itself. Furthermore, the modifier will assign a property named Site Type, which tells for each atom the type of reference site it has been assigned to by the WS algorithm. This information allows to subsequently identify antisites, for example, by comparing the type of an atom to the type of its site. Finally, the algorithm assigns two additional properties named Site Index and Site Identifier to each atom, specifying the index and the unique identifier (if present) of the site to which the atom has been assigned. This information allows you to subsequently identify atoms which have left their original sites, for example. Note, however, that in atoms output mode you will not be able to identify vacancy sites, because only the physical atoms are retained.

Counts the total number of sites in the reference configuration which are not occupied by any atom from the displaced configuration (i.e. sites with zero occupancy).

These two quantities are made available as global attributes named WignerSeitz.vacancy_count and WignerSeitz.interstitial_count by the modifier.

When working in output mode Sites, each atomic site will be associated with a new integer property named Occupancy. You can subsequently use the Expression selection modifier to select sites that correspond to certain types of point defects. For example, the selection expression Occupancy == 0 selects all empty sites (vacancies) while the expression Occupancy > 1 selects all sites containing at least one interstitial atom. Typically, you want to visualize just the defective sites and hide all other sites, which are occupied by exactly one atom. This can be achieved with the following modification pipeline setup:

Systems with more than one atomic species

To identify antisites and similar defects in multi-component systems, more specific information about the atom(s) that occupy a site is required. For this, the modifier provides the option Output per-type occupancies. If activated, the modifier breaks down the occupancy number of each site into type-specific counts. Thus, if the displaced configuration contains atoms of different types, then this allows you to determine how many atoms of each type occupy each site of the reference crystal. The per-type occupancy numbers are output as vector components of the Occupancy particle property. For example, the property component Occupancy.1 will contain the number of atoms of type 1 occupying a site.

OVITO’s particle selection tools, in particular the Expression selection modifier, can be used to select the sites that meet specific criteria, for example A-sites that are occupied by a B-atom (antisite). Another way of selecting this type of defect sites is using OVITO’s scripting interface or OVITO’s Python script modifier. You can find a detailed example in the documentation of the WignerSeitzAnalysisModifier class.

Affine mapping of the simulation cell

The Affine mapping setting controls how OVITO treats situations in which the volume of the periodic simulation cell has changed between the reference and the current configuration. Such cell changes typically occur in simulations due to active straining of the cell or stress relaxations. If affine mapping is turned off (the default), the current and the reference particle positions are taken as is for the WS analysis. Any changes of the simulation cell geometry are ignored. If the particle system expands or shrinks as a whole, however, the associated particle displacements may lead to artifacts in the Wigner-Seitz analysis, because particles appear to have left their ideal reference sites.

To avoid such artifacts associated with system volume changes, the option To reference performs a remapping (homogeneous rescaling) of the current particle positions to the reference simulation cell before performing the actual WS analysis. For that, OVITO determines the affine transformation mapping the current onto the reference simulation cell geometry and applies this homogeneous transformation to all particle coordinates. Now the particles will stay close to their original sites should the system expand or shrink as a whole.