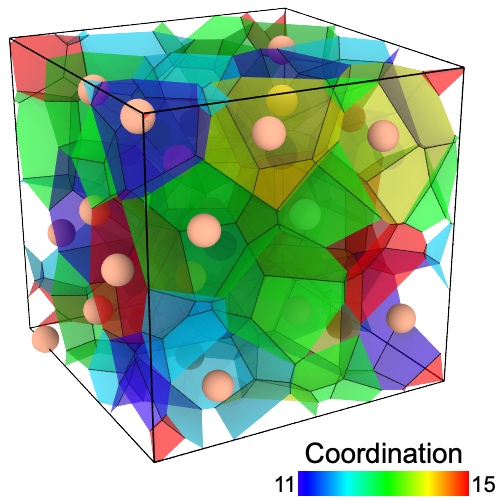 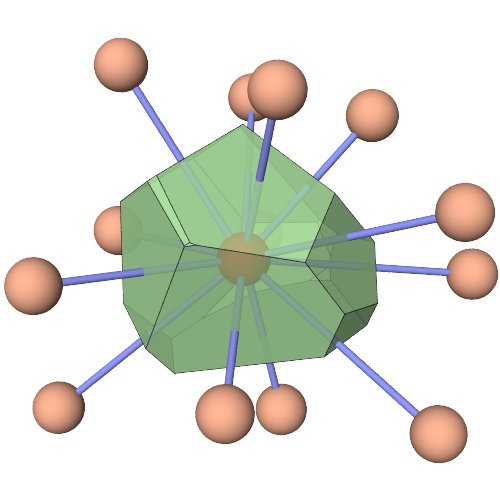 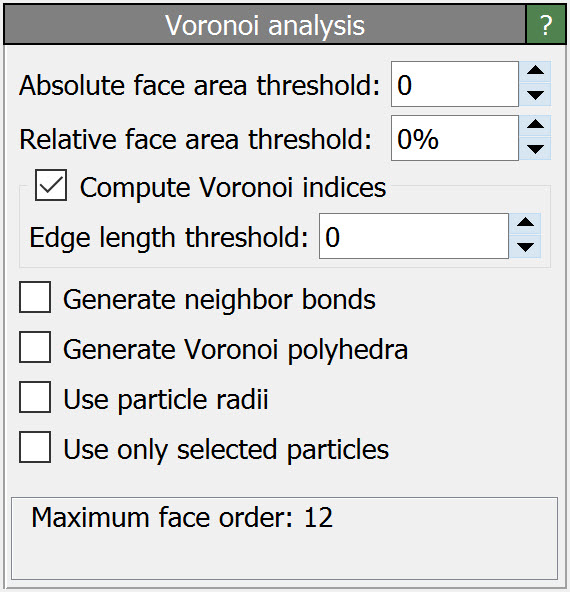 This analysis modifier calculates the 3D Voronoi tessellation of the simulation box, taking the particle positions as Voronoi cell centers. By default the following output quantities are computed for each input particle:

The volume of the Voronoi cell of the particle (in cubic simulation units of length).

The number of faces of the Voronoi cell. Since there is one Voronoi face per nearest neighbors of a particle, this quantity is typically called the coordination number.

The distance from the particle to the farthest vertex of its Voronoi cell. This distance is also the radius of the biggest empty sphere (i.e. containing no other particle) touching the particle. It can thus be used to quantify the size of the cavities near the particles, by assuming that particles are points with no size. For this reason the quantity is called cavity radius.

Note that we don’t need to include the first two indices in the selection expression, since faces with less than three edges do not exist.

Due to limitation in OVITO’s data model, which can only store per-particle Voronoi index vectors of uniform length, the vectors are truncated at a certain maximum face order, which is given by the parameter Maximum edge count. Faces with more edges will be ignored and don’t show up in the truncated index vector. OVITO warns if it encounters any such higher order faces and will recommend to increase the vector length to avoid truncation.

How to analyze the computation results

If you are interested in the indices computed by the modifier for a particular particle, you can open OVITO’s Data Inspector panel. It lists all properties of the particle, including the computed Voronoi indices. If you would like to perform a statistical analysis of the Voronoi polyhedra, e.g. to determine the Voronoi index vector that occurs most frequently in your system, then you can use OVITO’s Python scripting interface to access the computed per-particle indices. You can find an example script in the OVITO Scripting Reference. 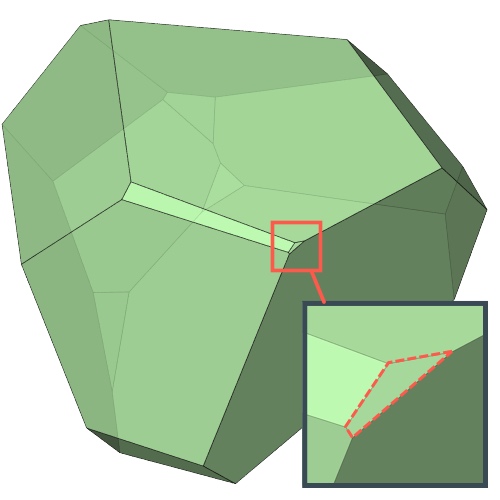 Voronoi polyhedra are known to be unstable with regard to small perturbations of the particle positions in many cases. To address this issue, at least partially, the modifier provides threshold parameters for the area of Voronoi faces and the length of face edges to filter out very small, almost degenerate faces and edges.

If an edge of a Voronoi face is shorter than the specified edge length threshold, then this edge is not counted toward the order of the Voronoi face. Furthermore, if the face’s area is below the area threshold, then the face is not included in the computed Voronoi index and it also not counted toward the coordination number of the central particle. The threshold face area can either be specified as an absolute value or relative to the total surface area of the Voronoi polyhedron. The purpose of these thresholds is to exclude very small faces/edges, which occur sporadically in the presence of perturbations, from the analysis and the counting. Also see this paper on the topic.

Specifies a minimum area for the individual faces of a Voronoi cell. The modifier will ignore any Voronoi cell face whose area is smaller than this threshold area when computing the coordination number and the Voronoi index of a particle. The threshold is an absolute value in units of length squared (in whatever units of length your input data is given).

Specifies a minimum area for the individual faces of a Voronoi cell in terms of a fraction of the total surface area of a Voronoi polyhedron. The modifier will ignore any Voronoi cell face whose area is smaller than this threshold when computing the coordination number and the Voronoi index of a particle. The relative threshold is specified as a fraction of the total surface area of the Voronoi polyhedron the faces belong to. For example, you can use this threshold to exclude those faces from the analysis with an area less than 1% of the total area of the polyhedron surface, like it was done in this paper.

Activates the calculation of Voronoi indices. The modifier stores the computed indices in a vector particle property named Voronoi Index. The i-th component of this vector will contain the number of faces of the Voronoi cell having i edges. This implies that the leading two components of the per-particle vector are always zero, because the minimum number of edges a polygon can have is three.

Controls the order up to which Voronoi indices are computed. Note that Voronoi faces with a more edges than this maximum will be ignored when calculating the index vector.

Specifies the minimum length a face edge must have to be considered in the Voronoi index calculation. Edges that are shorter than this threshold will be ignored when counting the number of edges of a Voronoi face. The threshold value is given in absolute units of length (depending on your input data).

If this option is enabled, the modifier generates bonds between neighboring particles that share a Voronoi face. A bond is generated for every Voronoi face whose area is larger than the face area threshold and which has at least three edges longer than the edge length threshold.

Lets the modifier output a surface mesh to visualize the computed Voronoi polyhedra. Each volumetric region of the mesh represents a single Voronoi cell and has properties such as the cell’s volume, coordination number, surface area and the unique ID of the input particle located at the center of the cell. Use additional modifiers such as Expression selection and Delete selected to subsequently filter the set of displayed Voronoi cells, e.g., show only cells having a certain number of faces or belonging to a particular atom.

Use only selected particles

Restricts the analysis to the subset of currently selected particles. Particles that are not selected will be treated as if they did not exist.

Particles located exactly on the simulation box boundaries (in a non-periodic direction) pose a problem. The Voronoi cell of such particles is singular and the construction algorithm may stop with the error message “Could not compute Voronoi cell for some particles”. The solution to this type of problem is to slightly enlarge the simulation box to fully include all particles. This can be done, for example, by using the Affine transformation modifier to scale the box size by a factor greater than 1.

New in version 3.7.9: Calculation of the Cavity Radius property (thanks to Alain Dequidt)