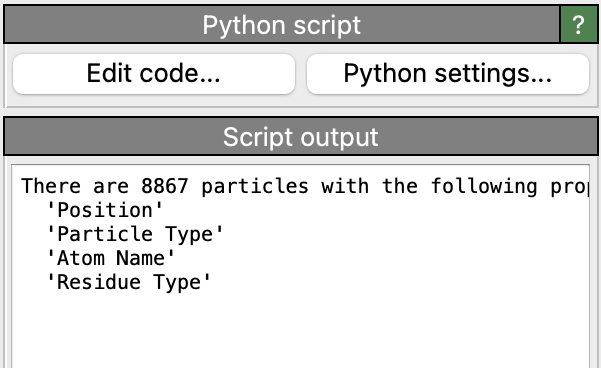 This modifier type lets you write your own user-defined modifier function in the Python language. Your Python function runs within the graphical user interface just like a normal OVITO modifier and can manipulate, analyze or amend the simulation data in exactly the way you need it. Such user-defined modifier functions are useful whenever the standard tool set of built-in modifiers of OVITO is insufficient to solve your specific problem.

What is a Python script modifier?

A script modifier consists of the definition of a Python function, which you enter into the integrated code editor window of OVITO Pro. For instance:

This function prints the current number of particles to the log window and generates a new dynamic attribute named Time by computing its value based on the current animation frame number. OVITO takes care of executing your Python function at the right times, e.g., whenever you drag the animation time slider and the results of the data pipeline must be recomputed. Note that you only define an isolated Python function and not an entire program. OVITO is responsible for calling your user-defined function whenever it needs to.

Your modifier function receives the current dataset, generated by the upstream data pipeline, as input argument data. You can then implement your own data processing algorithms in the Python function, which operate on the provided input data. Use OVITO’s comprehensive Python API to access different parts of the dataset or dynamically add new data objects to it, which will then be visible in OVITO’s interactive viewports. 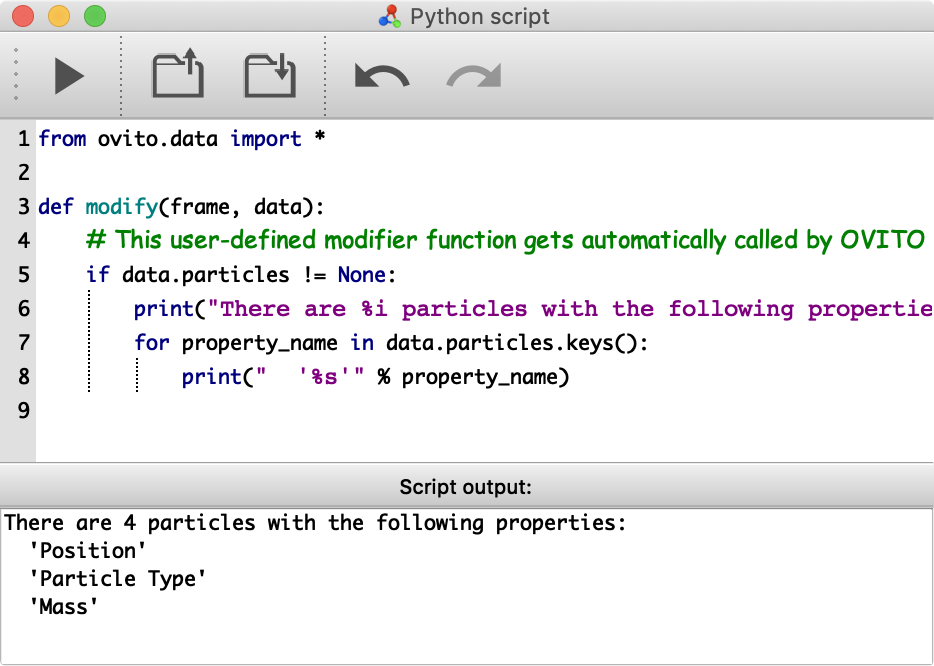 After inserting a new Python script modifier into the pipeline you can open the integrated code editor using the Edit script button. The editor window lets you change the source code for the user-defined modifier function, which initially consists of a few example statements. You should replace these statements with your own code, performing the computations or actions that are needed to solve your specific problem. See the OVITO Scripting Reference for further instructions on how to write user-defined modifier functions. Note that the Python function, which gets called by OVITO’s data pipeline system, must be named modify() and have the signature shown in the example above. However, you are free to define additional helper functions in the same source file and invoke them as sub-routines from your main modifier function.

Once you are done writing the user-defined modifier function, press the Commit and run script button (the “play” icon) in the code editor’s toolbar. This will compile the code once by executing any top-level Python statements (this includes the function definition itself) and then request an update of the data pipeline. As part of this pipeline update, your modify() function will get invoked by the system.

Note that the pipeline system will typically run your modify() function repeatedly, for example when stepping through a simulation trajectory. That means you should always write your modify() function in such a way that it doesn’t produce any side effects on the global state of OVITO. The function should be “pure” and stateless in the sense that it only operates on the current data collection it receives from the system as a function parameter. The pipeline system is free to decide whether it caches the results of your modifier function, and it may call your function repeatedly if necessary. In other words, you should design the function in such a way that it can process each trajectory frame in isolation.

First, you should give your modifier a meaningful name, making it easier for you to identify the modifier in the data pipeline. The pipeline editor of OVITO lets you to change the title of the modifier from the default label “Python script” to a more descriptive name that better summarizes the specific purpose of your Python function. In order to rename a modifier in the pipeline editor, make sure it is selected and then click the item a second time to edit its name.

Next, you have two alternative ways of making your Python modifier permanently available in future program sessions. The first is to save the entire modifier, including the definition of the modify() function, as a modifier template. Modifier templates you’ve saved appear as additional entries in the list of available modifiers, allowing you to easily access your user-defined modifier scripts and insert them into new data pipelines.

The second option is to save the Python code as a .py source file into one of the following directories on your computer. OVITO Pro automatically scans these directories at program startup and displays all .py scripts in the list of available modifiers.