This modifier classifies the local structure of particles using the Chill+ algorithm, which allows identification of hexagonal ice, cubic ice and gas hydrates. This structure identification method has been described in

Please cite this paper when you use this structure identification algorithm in your work. 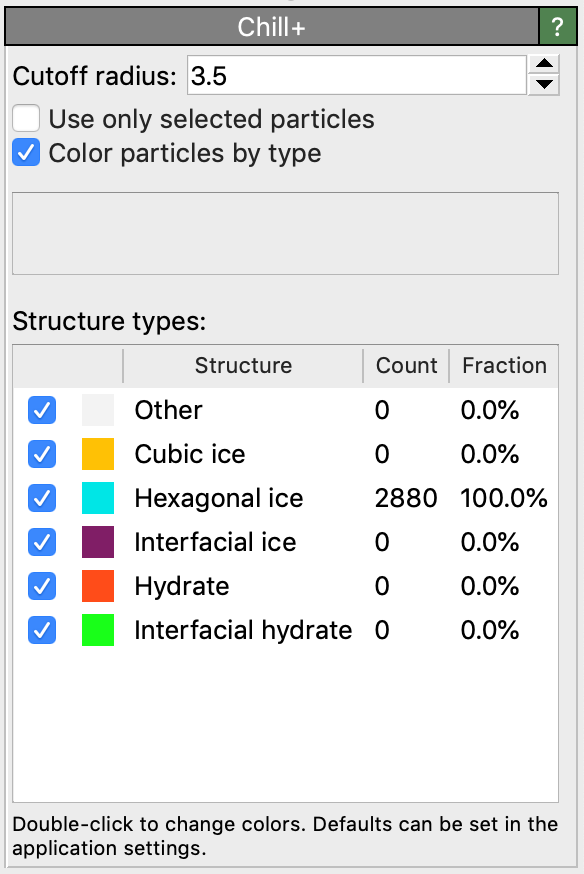 The Chill+ algorithm classifies particles based on their local environment. Solid water phases usually have 4-coordinated water molecules, so considering two neighboring water molecules (O–O distance less than 3.5 Å), we may define a cluster of 8 molecules by these two molecules and their neighbors. If one looks at these molecules along the axis of the bond between them, they can be characterized by whether all the six particles spreading out from this bond are visible (staggered bond), or whether the neighbors of the closest molecule blocks the view of the neighbors of the farthest molecule (eclipsed bond). It does so by taking the correlation of the local ten-Wolde bond order parameter \(q_{3m}\) between the pair of atoms. Precisely, the structure is determined by whether the correlation is between 0.25 and -0.35 (eclipsed) or less than -0.8 (staggered). An atom in bulk has four bonds that are either eclipsed or staggered, and the structure is determined based on how many it has of each, by the criteria below.

Particles not falling into one of these categories are classified as “Other”.

The modifier sets the Structure Type property for each particle, which is encoded as an integer value:

The original code for this modifier has been contributed to the OVITO project by Henrik Andersen Sveinsson.